Dynasty Electric's On the Rise

I know we’ve all had that moment when a surprisingly awesome, unknown song starts playing on the radio and your friend next to you yells in excitement, “HEY, I KNOW THIS BAND!”. Well folks, this is your glaringly obvious chance to be that friend. Dynasty Electric has been knocking on the doors to fame for the last year or so now, with the release of two creatively crafted music videos (“Golden Arrows” and “Eye WideOpen”) and an extensive national summer tour. Not to mention, Golden Arrows was picked up for a Victoria’s Secret ad earlier this year (Watch it here). Check out our interview below with Dynasty Electric’s, Jenny Electrik and Seth Misterka.

How was the concept formed for your video, Golden Arrows?

Jenny Electrik and a friend bought an old school bus and transformed it into an environmentally friendly bus known as the Green Bus. We were using it for some tours and trips, and one day, as we were riding around, I had the idea to shoot a music video while the bus drove around the city. So one afternoon we pulled up to the office of our record label at the time - Dame Dash's BluRoc Records in TriBeca - loaded everyone there including other musicians, rappers, and the label crew onto the bus.  We cranked up the track, drove around, and allowed it to happen in its own way while the cameras rolled.

How'd you pick the volunteers on the bus?

We recruited some friends, and the rest were all the folks at BluRoc Records that day. Dame Dash, Ski Beatz, McKenzie Eddy, SriKala, John Cave, Brady Watt, Shimon Hikri...

Did you run into any trouble during the shoot?

None at all, it went totally smoothly. We definitely got some funny looks though!

Compare the making of this video with some of your more conceptual ones, for example Eye Wide Open. 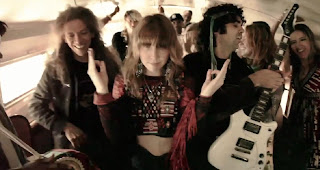 Golden Arrows is a totally organic video that gives a slice of our life in New York.  It was really just at matter of letting the cameras roll, and editing it together, so it was relatively easy to make.  The director Dennis Feitosa did a great job with the editing and color correction.  Eye Wide Open, on the other hand, delves into an imaginary, illusory world of smoke and shadow.  It was quite difficult to achieve technically, but I love the results.  The director John Fitzgerald really killed it with the special effects on this one.

What does the video and idea of golden arrows mean to you?

To me, to shoot golden arrows is to give whatever you do your best shot, to put your all into it, to put your love into it and send it out into the world.

If you can swing it, don't miss Dynasty Electric at NYC's CMJ Music Marathon on October 16-20. Also performing are artists such as Kimbra, GZA, and Hey Rosetta! (Get more information here) Be sure to keep your radios loud for this talented duo in your hometown!

Revolution, I Love You "Cotton Shirts"

Blogs To Blog About